Construction is well underway for the new international bridge in Madawaska as contractors prepare for warmer weather.

MADAWASKA, Maine — Construction is well underway for the new international bridge in Madawaska as contractors prepare for warmer weather.

Independent contractor Reed & Reed of Woolwich and New Brunswick’s Greenfield Construction, along with the Maine and New Brunswick departments of transportation, are collaborating on the project.

Night work on the bridge began in September. Since then, workers have built a jetty on the Saint John River and are working on retaining the land.

Reed & Reed continues to work on the cast-in-place concrete abutments and wing walls in the United States located on the General Services Agency plot for the new land entry point, while their Greenfield counterparts are doing the same at the Canadian land port of entry, said Andrew Lathe. from the Maine Department of Transportation.

Reed also removes Pillar 4, a steel cofferdam used to dewater the pillar foundation at this location. Once the pier foundations are completed, there is no need to maintain a dewatered access into the river. 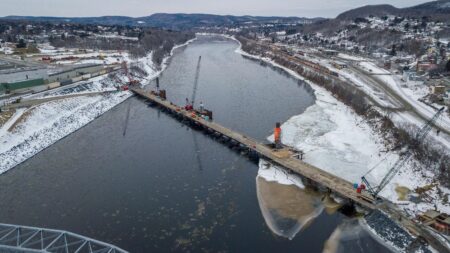 Temporary removal of bridge trestle is underway on both sides of the border in preparation for the spring thaw to prevent ice jams. The contractor will reinstall the temporary bridge trestle in the spring to facilitate the erection of the steel superstructure, which is expected to begin in late summer 2022.

The bridge project is accompanied by the creation of a new land entry port. The General Service Administration had completed the foundation of most of the structure’s foundation by the end of October.

“The Madawaska LPOE project is on track and progressing as planned,” said Paul Hughes of the General Services Administration.

Since the foundation was laid, the public works, building and canopy foundations have been backfilled for the winter. In addition, 50% of the retaining wall has been built. In the meantime, the project continues to work on the necessary construction documents as well as the interior demolition of the old McDonald’s, Hughes said.

The land port of entry is expected to be substantially complete and operational by the end of 2023, coinciding with the opening of the MaineDOTs international bridge project. For now, the existing century-old bridge is in use, and has had a posted five ton weight limit since 2017. 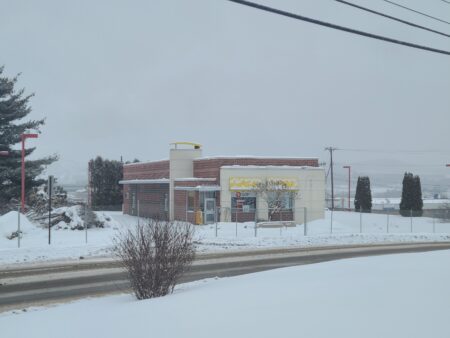 Still standing, the old McDonald’s building in Madawaska has not yet been demolished and no specific date has been given for its demolition. (Emily Jerkins | St. John Valley Times)

Thank you for reading your 4 free articles this month. To continue reading and supporting local rural journalism, please subscribe.

History links BIRMINGHAM, Alabama — The Southeastern Conference recently announced the community service team for men’s and women’s track and field and cross country and included Georgia Wesley John and Titiana Swamp. The conference appoints a community service team for each of its 21 league-sponsored sports, seeking to showcase an athlete from […]

Council bosses were asked to implement a plan to build a BMX track in Workington during a meeting on Wednesday. Allerdale Borough Council leaders were invited to provide an update on plans for a BMX track to the full council, during a discussion of their recent work. Allerdale Independents Councilor Peter Gaston asked Environmental Services […]