On the first day of resuming normal life in Shanghai, one of the city’s top attractions, Yuyuan Garden welcomes tourists on June 1. Visitors take photos and many centuries-old brand restaurants welcome customers. Currently, the scenic spot requires visitors to make an appointment and show their health code to enter. Photo: Wu Shiliu/WG

As Beijing announced a major reopening of dining services, schools and scenic spots on Sunday, Shanghai embraced completely normal life and work and Guangzhou saw the return of dragon boat racing for the first time after A two-year hiatus, China is marching into the second half of 2022 with a hard-earned victory over the stealth variant of Omicron and high hopes of meeting its full-year economic growth target.

Chinese economists have said that Beijing’s lifting of restrictive COVID-19 measures and the resumption of normal life in Shanghai, which came two weeks ahead of schedule, will surely lay a good foundation for a rapid economic recovery, leading to 90% chance of positive economic growth for the country in June and significantly positive economic growth in August.

Beijing’s municipal government announced on Sunday that it would allow dine-in service at restaurants from Monday, except for Fengtai district and parts of Changping district, a month after banning the service in all the city to contain the Omicron variant. Elementary and middle school students will also resume offline lessons from June 13.

The Global Times reporter learned from several restaurants, including hotpot chain Haidilao, that they were making full and orderly preparations on Sunday for the resumption of restaurant services. A restaurant staff member cleans a window on June 5, 2022 to prepare for the first batch of customers at the restaurant after a hiatus of more than a month. Beijing will resume catering services for restaurants from June 6 after a resurgence of COVID-19 was largely stemmed. Photo: Li Hao/GT

Residents who previously worked from home will be allowed to go to the office, while buses, subways and taxis will resume normal operations. However, residents must show a negative nucleic acid test result within 72 hours to ride buses, subways and enter public places, airports, buildings and communities.

The number of daily new cases of locally transmitted infections across China has fallen below 100 for six consecutive days. China’s National Health Commission on Sunday urged Shanghai to resolutely prevent the resurgence of COVID-19 and Beijing to cut chains of transmission.

A senior expert from the Chinese Center for Disease Control and Prevention told the Global Times on condition of anonymity on Sunday that Beijing’s lifting of key COVID-19 restrictions on Sunday demonstrated the successful practice of Chinese megacities in timely and timely epidemic measures. targeted against Omicron after the tough and tough Shanghai. uphill battle, which saw the country’s financial hub placed under lockdown for more than two months. 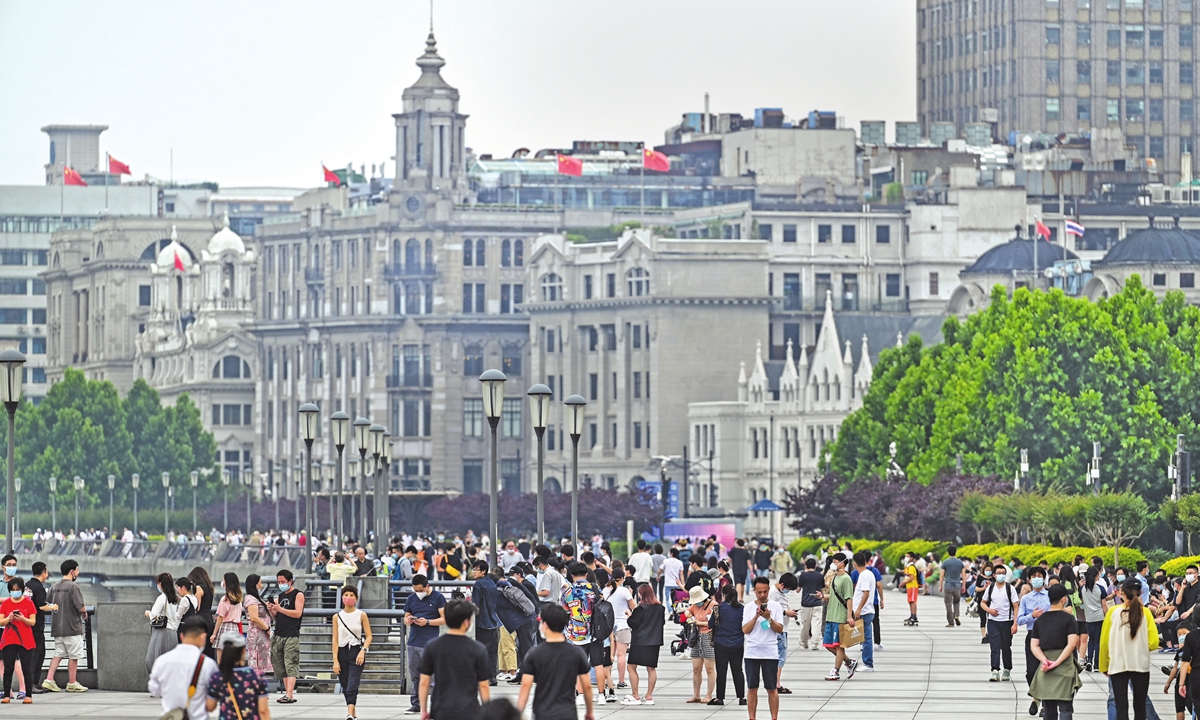 People gather on the Bund along the Huangpu River in Shanghai on June 1, 2022, following the easing of COVID-19 restrictions in the city after a two-month lockdown. Photo: AFP

While announcing that most restrictions were being lifted in the capital, Beijing government spokesman Xu Hejian said on Sunday that strict measures would remain in place in Fengtai District and parts of Changping District, and that people in the area had to work from home until Thursday.

The expert said Beijing’s decision to reopen most parts of the city while subjecting two districts to strict measures demonstrated Beijing’s targeted measures under the zero momentum policy, which was based on detection early on from the virus, and succeeded in preventing the capital from being placed on a city-wide lockdown.

One of the highlights of Beijing’s announcement was that it required a negative nucleic acid test result taken within 72 hours to enter public places, and the expert believed that acid tests Regular nucleic tests would provide an essential basis for the reopening of cities affected by COVID-19, as there are no other means of detecting the virus at an early stage.

Liang Wannian, head of China’s expert group on COVID response under the National Health Commission, said at an earlier press conference that static management or city-wide lockdown can be effectively avoided after the implementation of measures focusing on “early detection, early notification, early quarantine and early treatment,” and setting the responsibilities of different departments.

As the majority of the country enters a booming summer season in June, the economic recovery is also heating up, with the recent three-day Dragon Boat Festival holiday bringing a vibrant consumer market nationwide.

Passenger travel is also picking up, with 6.4 million passengers expected to travel by train on Sunday, according to China Railway. The national railway carried an average of 5.4 million passengers a day from June 2 to 5, an increase of more than 2 million from levels recorded during the May 1 holiday.

Domestic tourism has also picked up steadily during the holidays, especially in Shanghai and Beijing. Online travel agency Lvmama told the Global Times on Sunday that the number of tourists on the first day of the Dragon Boat Festival holiday increased by about 43 percent compared to the first day of the May Day holiday, and that Travel fever had hit the Yangtze River. Delta region with many parks in Shanghai welcoming a large number of tourists. Tickets to Shanghai Haichang Ocean Park sold out shortly after Lvmama launched the trip on Friday night.

Guangzhou in southern China kicked off its long-awaited dragon boat races and exhibition activities over the holidays for the first time in two years. In 2020 and 2021, the Chinese Carnival in southern China, which features teams competing on water and spectators gathering to watch and drink, was canceled in most areas of the city due of an epidemic.

“China will see clear positive growth in August. The dynamic zero-COVID unified national policy has laid a solid foundation for the recovery of the whole economy,” Cao said.

“If the epidemic is completely contained in the second half of this year and the impact of the Russian-Ukrainian conflict is limited on the European continent, it is quite possible that China will achieve economic growth of 5% or more on the continent. whole year,” he added. Cao noted.

Since Shanghai lifted its lockdown from June 1, all malls, parks, restaurants and KTVs have reopened to customers, with searches for hotpots, KTVs and nail salons across multiple online platforms increasing 200% from the previous last month.

Hu Qimu, chief researcher at the Sinosteel Institute of Economic Research, told the Global Times on Sunday that China’s economic recovery would be on the fast track from June, and he was optimistic the country would hit its GDP target. around 5.5% for 2022.

The epidemic in the first half of the year mainly affected the Yangtze River Delta, but several other major pillars of the economy such as the Pearl River Delta, the Yangtze River Economic Belt and the Chengdu Economic Circle- Chongqing operated normally. Although some mid- and high-end industries, such as autos, chips and medicine have been affected due to the surge in Shanghai, electronic equipment manufacturing has been less affected, Hu said.

Regarding the driving forces of economic growth, Cao said there is no problem with Chinese exports, as the pandemic has had a big impact on production in other countries and products. Chinese are in high demand. At the same time, China is the backbone or middle link of many global supply chains.

Cao cited the Kunshan New Industrial and Hi-Tech Development Zone in East China’s Jiangsu Province as an example. KSND is home to the world’s largest display manufacturing base, producing 50% of the world’s displays for mobile phones, tablets and computers.

“The digital industrial upgrading of the manufacturing industry, which China has explored during the epidemic, can precisely stimulate the rapid growth of new digital consumption. New consumption is exploding,” Cao said.

French OVHcloud accelerates in first quarter, on track for 2022 targets By Reuters

Vodafone Fiji is on track to reach a new record in terms of transaction volumes as well as inbound remittances. This after the network company processed over $ 240 million worth of M-PAiSA transactions each month. Rajnesh Prasad, Marketing Director of Vodafone, is adamant that the cashless revolution has radically changed the way people pay […]